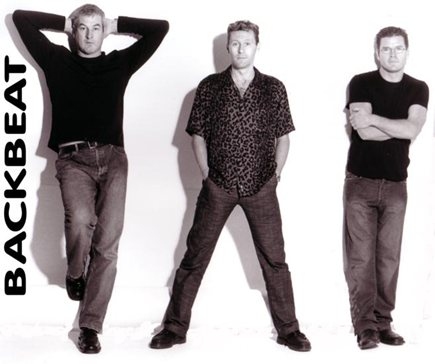 An outstanding, fun, male trio, with a style all their own!

Andy B Events are pleased to be working with Backbeat…
Backbeat are a very musically versatile party band and their show incorporates a double bass, keyboards and guitar, plus a super-charismatic front man who keeps the dance floor full and the audience entertained!

Chart hits mingle with good time rock ‘n’ roll to create a highly original show with non-stop party music and audience interaction! This show has to be seen to be believed.


Backbeat Party Band are a guaranteed success for any occasion, and will entertain any audience, no matter what their age or musical preference!

This party band has built up a reputation that is second to none, and over the years have performed at many venues and functions throughout the country. Ideal Party Band for weddings, corporate, Christmas Parties, functions, Holiday Parks, Hotels and Parties.

“I just wanted to write and thank you for your help with arranging for Martin and his band to play at my party. They were a great bunch of guys and everyone enjoyed the music. I would definitely recommend them to anyone wishing to hire a professional and fun group. Thank you again.”
Mary McGowan, Notts April 2015.

“Backbeat were absolutely fantastic! Everyone said so – they really got things going and the dance floor was full. I did have a word with the lads on their way out but wanted to let you know how wonderful they were. Many thanks for all your help – I’ll be contacting you again for next year’s ‘do’.”
Warburtons Ltd, Burnley

“Backbeat & Kurtis Ray White were both excellent! They were both well received from all our customers, thank you!”
Carol Rialas – Shaw Hill

For more details, email your enquiry to andy@andybevents.co.uk along with the date of the event, venue information & type of party.