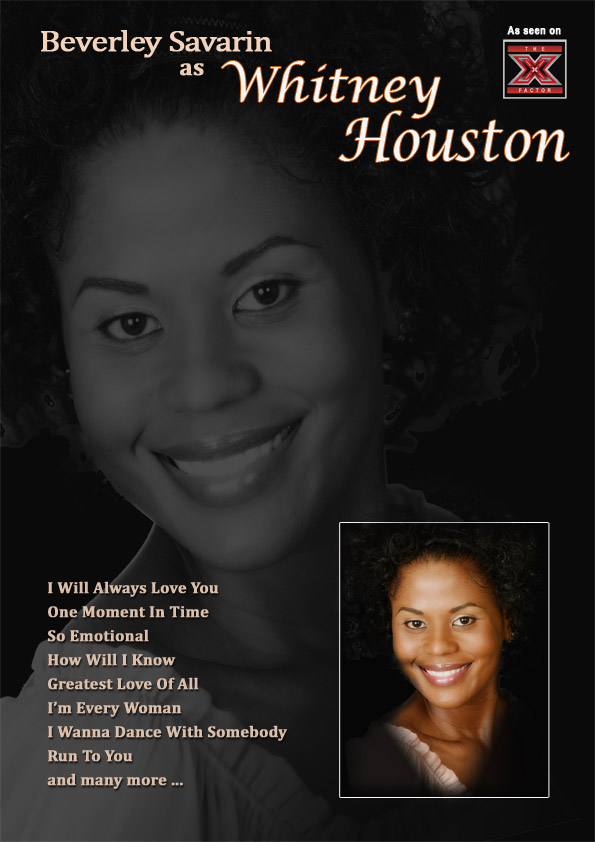 Andy B Events are pleased to present Beverley Savarin performing her tribute to Whitney Houston. Beverley is already established as a singer for special events not only throughout the North West, but the whole UK & beyond. One of her biggest inspirations was the global superstar Whitney Houston. So, it seems fitting that Beverley now plays tribute to her idol.

Beverley appeared on X Factor last year which was very well received, unfortunately, she wasn’t allowed to carry on as she’s already released 4 albums in the States so was seen as established rather than a new comer. See her audition & judges reaction here –

As well as a 45 minute tribute to Whitney, Beverley can then go on to perform a 2nd party set which could include hits such as –

Whatadya Want From Me – Adam Lambert

Could You Be Loved – Bob Marley

Let’s Hear It For The Boy – Denise Williams

Shake YOur Body Down – Michael Jackson

When I Think Of You – Janet Jackson

As a guide, expect to pay approx £650 for bookings throughout the North West which includes the Whitney tribute & the party set. For enquiries, email andy@andybevents.co.uk