One of my favourite party bands in the North West is ‘Groove Nation’. I’ve worked with them on several occasions & they always ‘deliver the goods’. Modern sound performing lively covers of funk, rock & pop favourites. 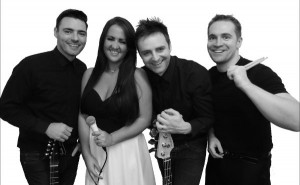 The line up is:

See them performing ‘Rolling in the Deep’ here –

I played with this band last Saturday (29/01/11) & they performed numbers currently in the charts, making them the most up to date party band I’ve worked with. These numbers included Cee Lo Green ‘Forget You’, Bruno Mars ‘Just the way you are, amazing’ & Pink ‘raise your glass’

Other numbers in their repertoire include:

For bookings & enquiries, contact andy@andybevents.co.uk As a guide, prices start from £995 for a 90 minute show, ideal for party nights, or it can be split into 2 *45 minute sets for weddings & other private celebrations.